One of Australia’s Top Artists,
Mark Heussenstamm (aka) HEUSSO has been producing Colorful Whimsical Artwork, for the young at heart, for more than 40 years!

Mark has always found humor in animals, especially in cats and it shows up in all his wonderful cat artwork. 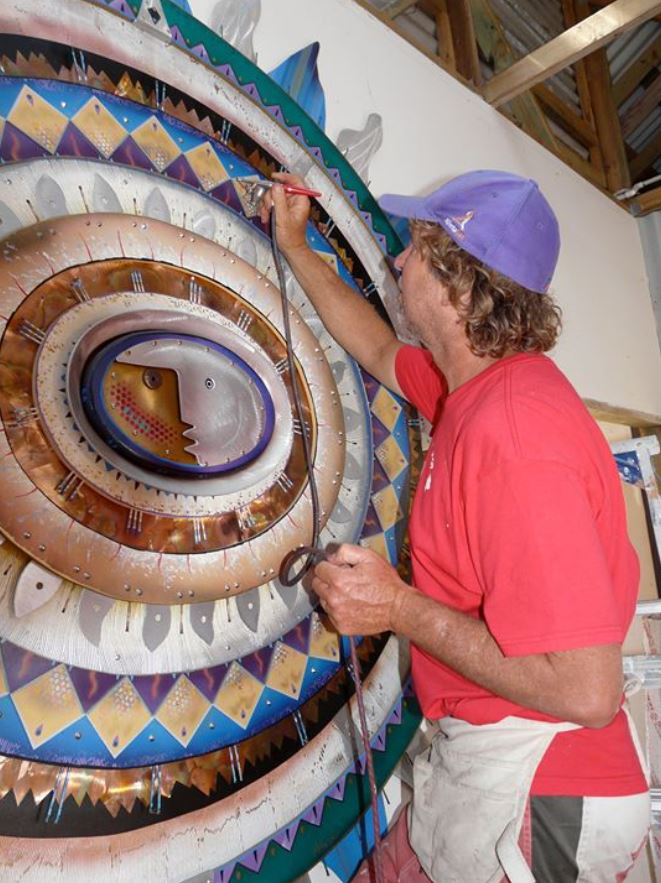 Heusso's Fine-Art Serigraphs are limited edition, numbered, titled and signed by Heusso Himself. Comes with a letter of Authenticity - Highly Collectible -

If you love cats - you need one of these wonderful whimsical Heusso Serigraphs!

- Order Yours Today -
For a limited time while supplies last!

NOW -Two for the Price of ONE!!

- Order Yours Today -
For a limited time while supplies last!

That's right two Heusso serigraphs for ONLY $59.oo!
Please email us (below) with the titles you want.
(we will send you a PayPal invoice) And Ship next day! 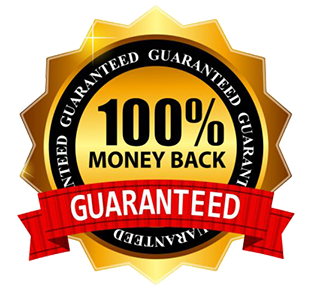 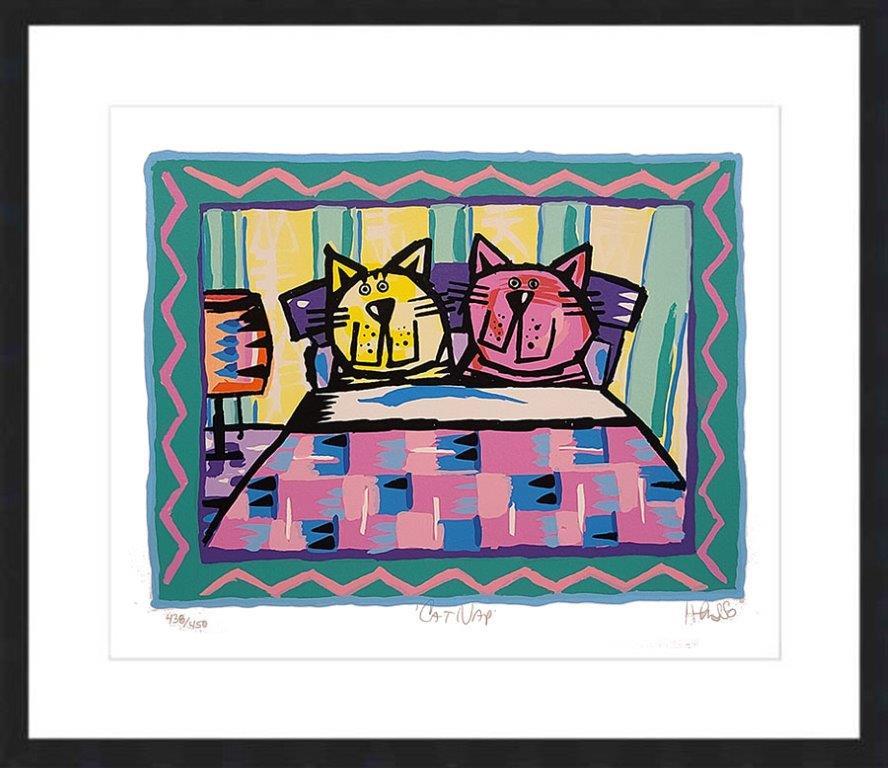 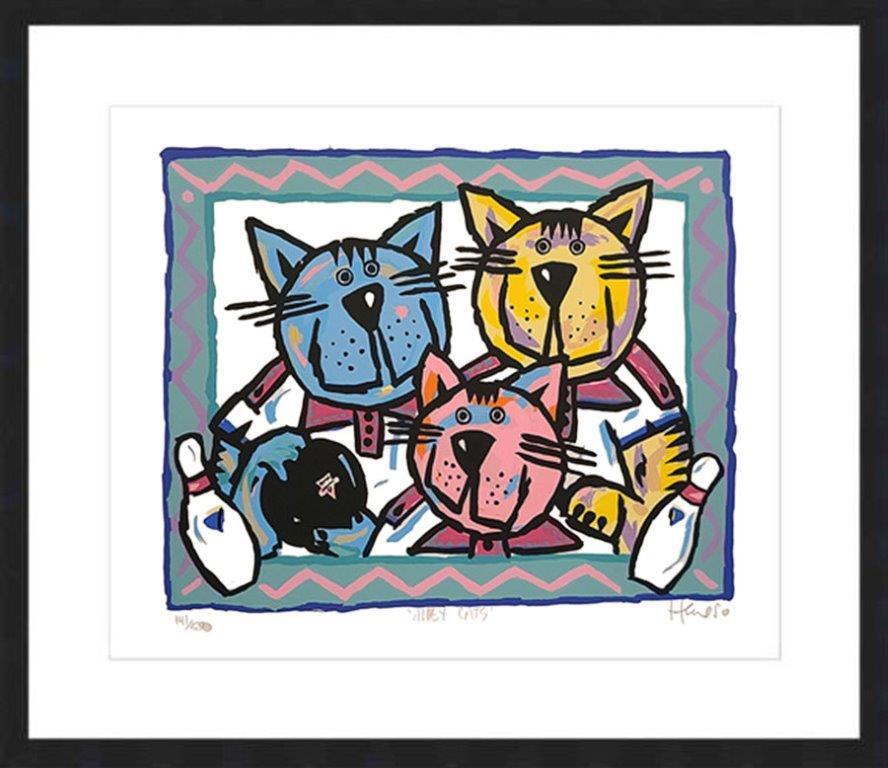 - We only have a limited amount of Serigraphs left - 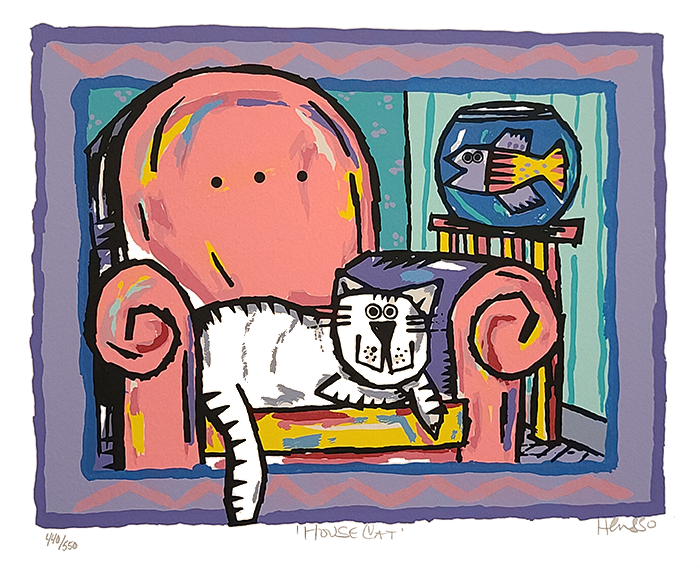 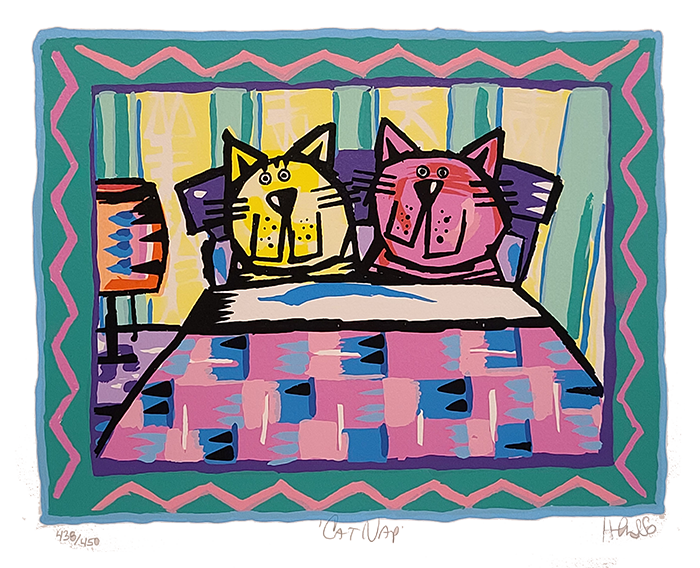 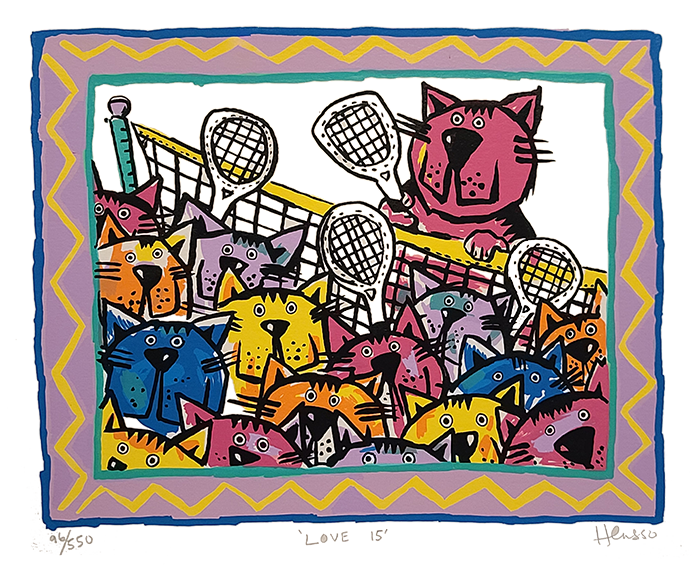 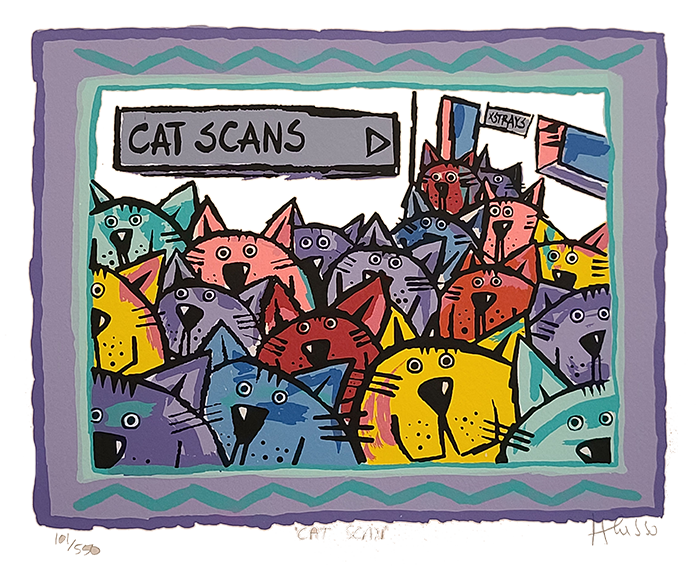 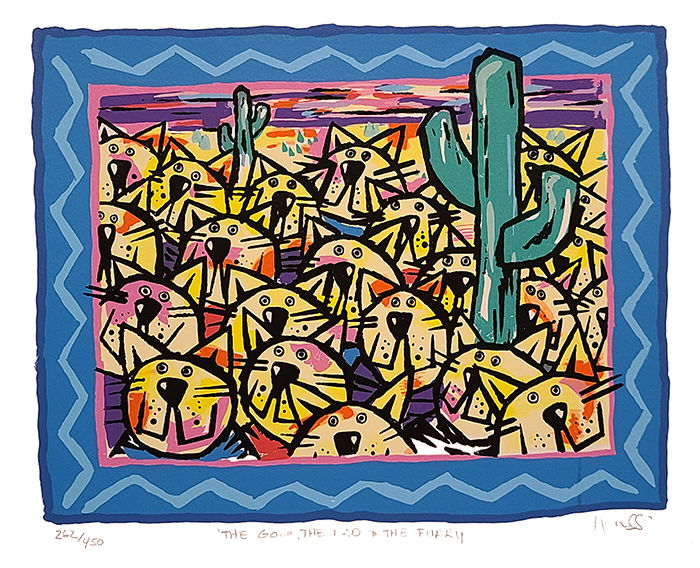 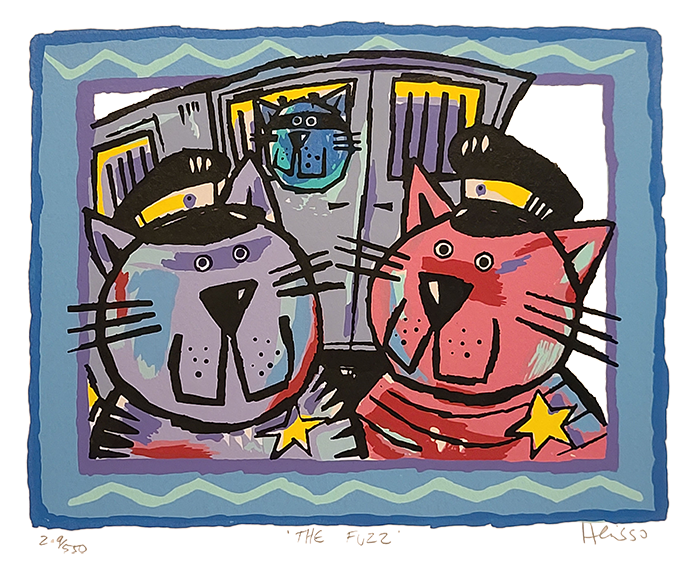 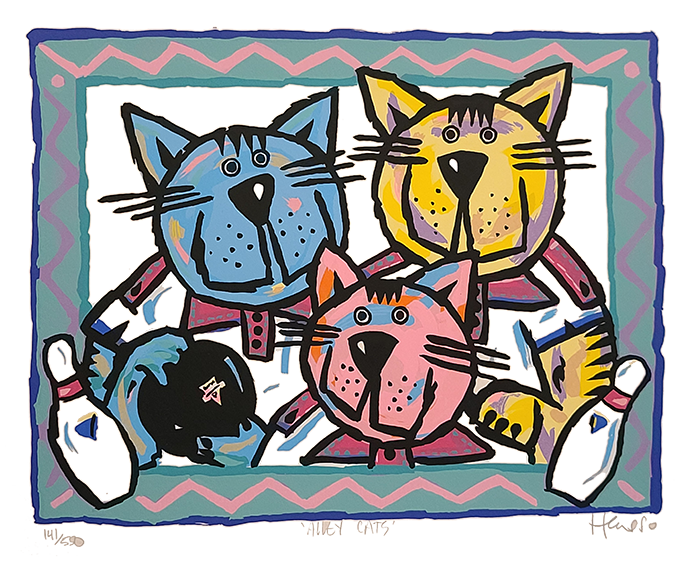 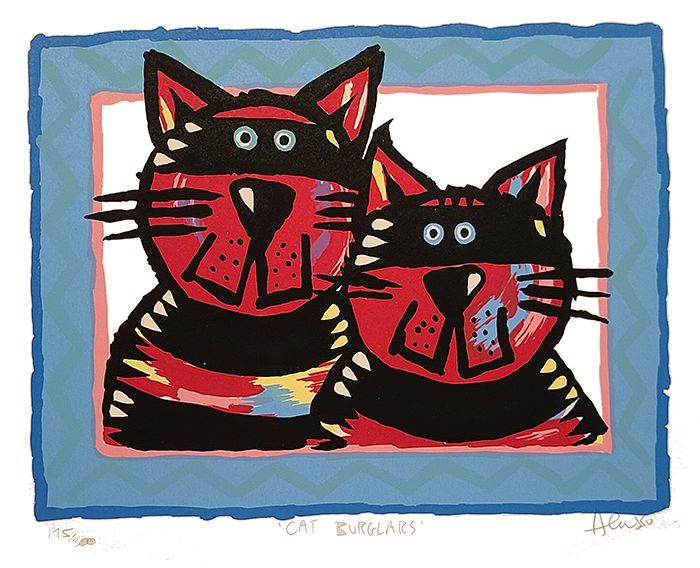 Heusso's Art makes a wonderful gift for any cat lover!

Heusso's Fine-Art Serigraphs are limited edition, numbered,
titled and signed by Heusso Himself, with a letter of Authenticity 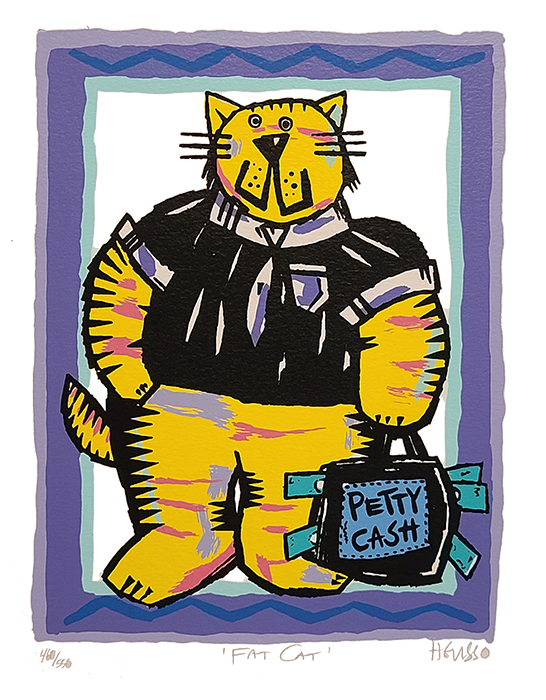 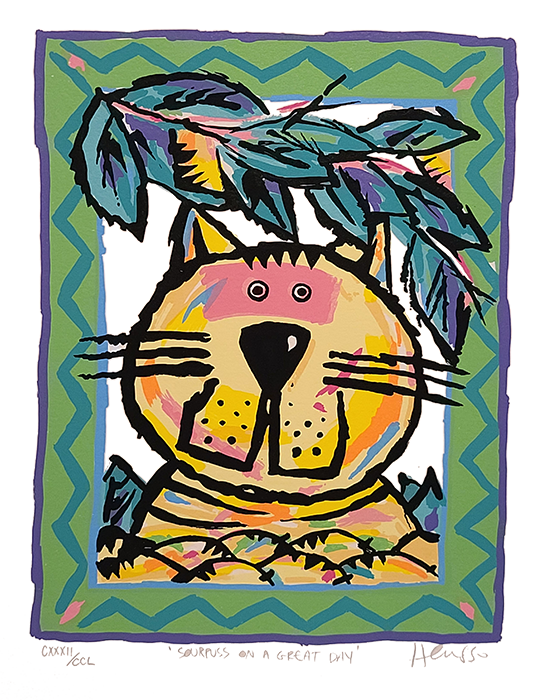 “Sourpuss on a Good Day” 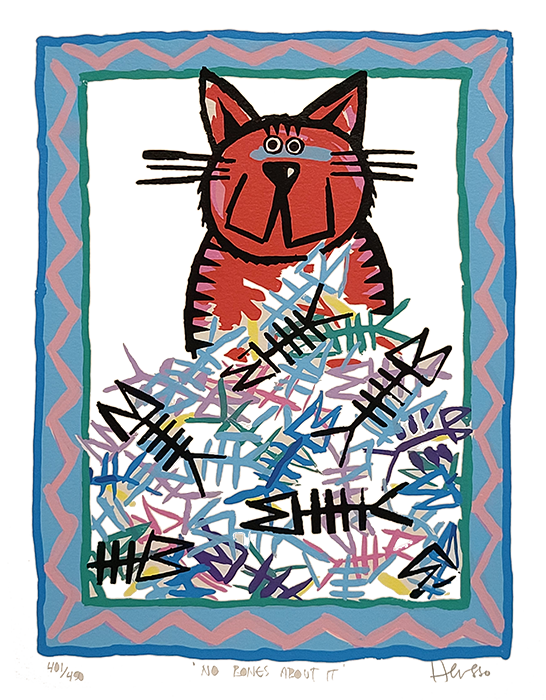 “No Bones About It” 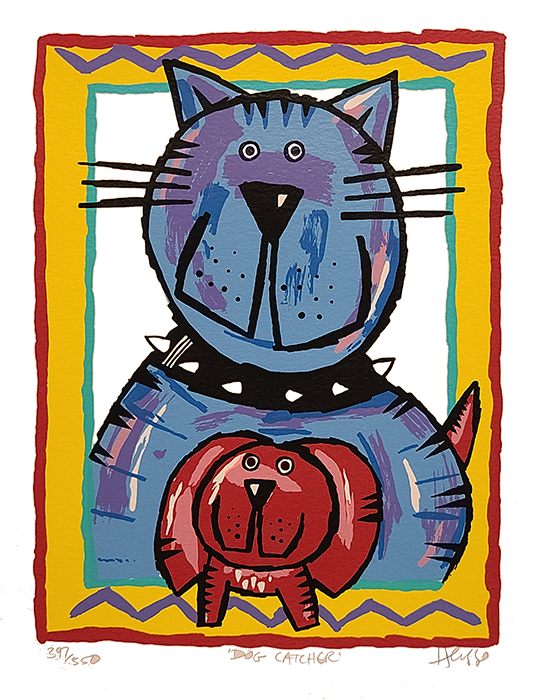 For a limited time while supplies last!
Two for the Price of ONE!! Only - $59.00
Each One is Hand Signed by the Artist Heusso 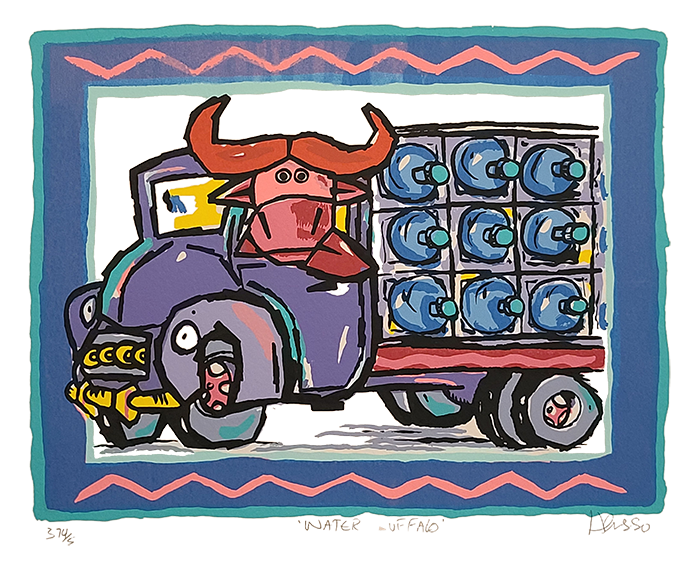 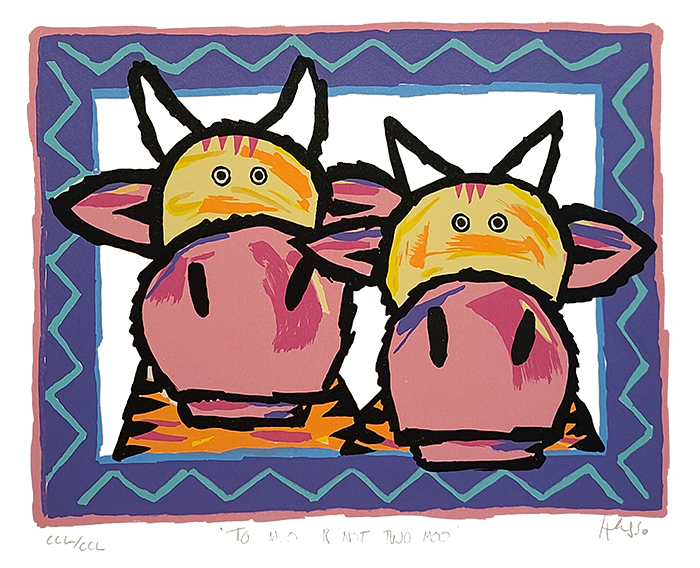 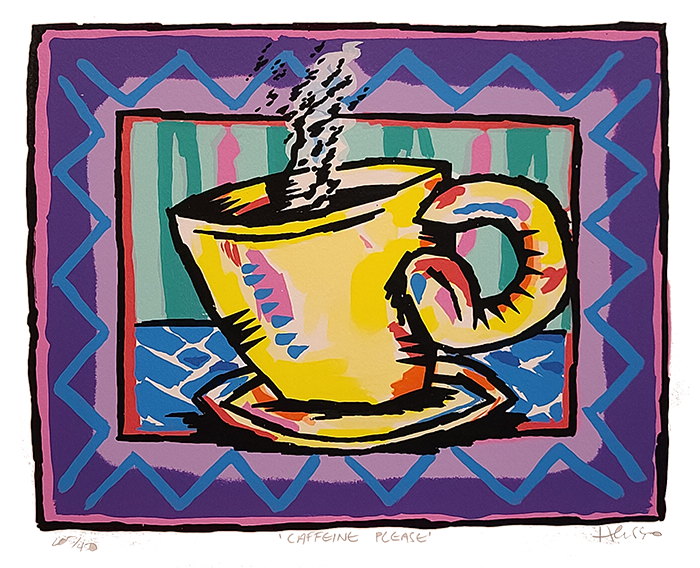 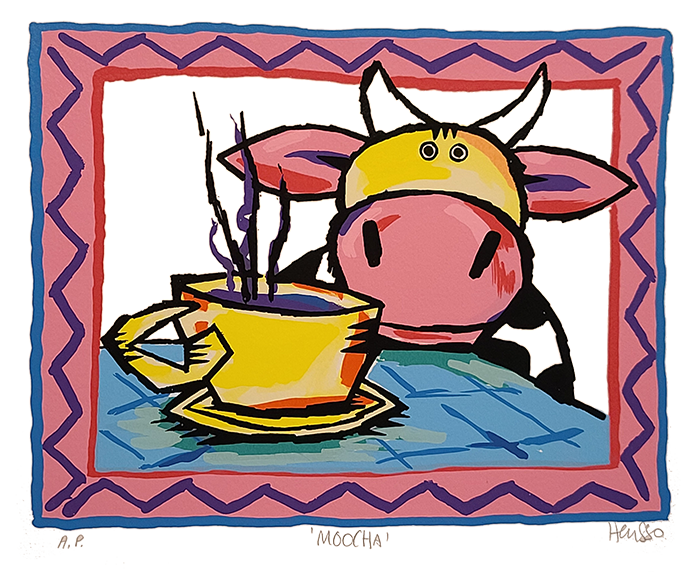 These are Large Wonderful Works of Art

More about Heusso, the Artist 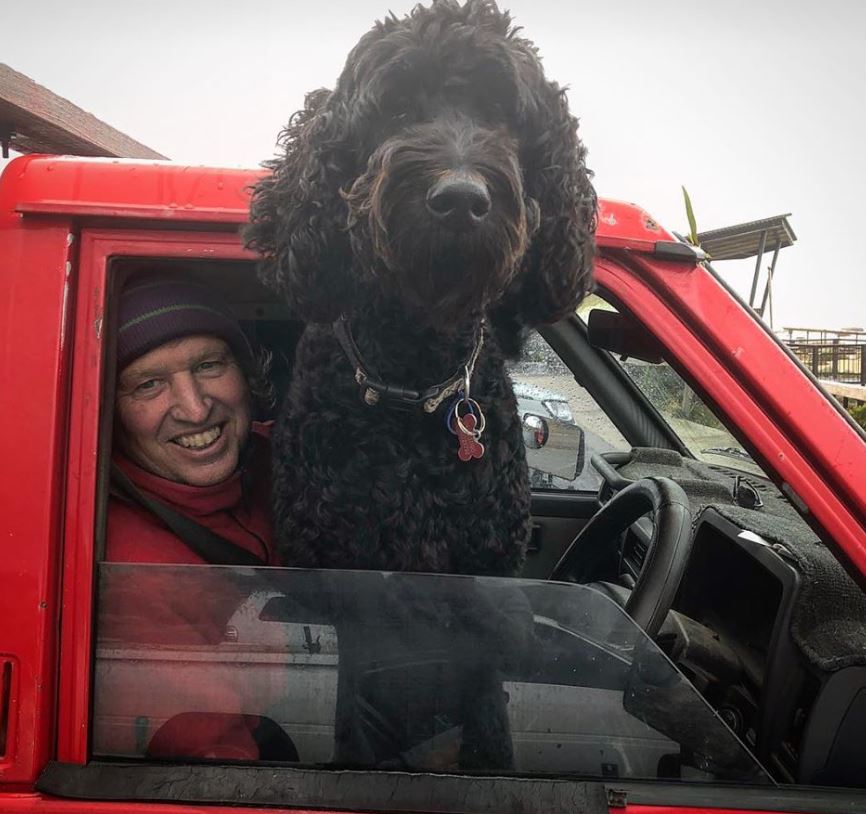 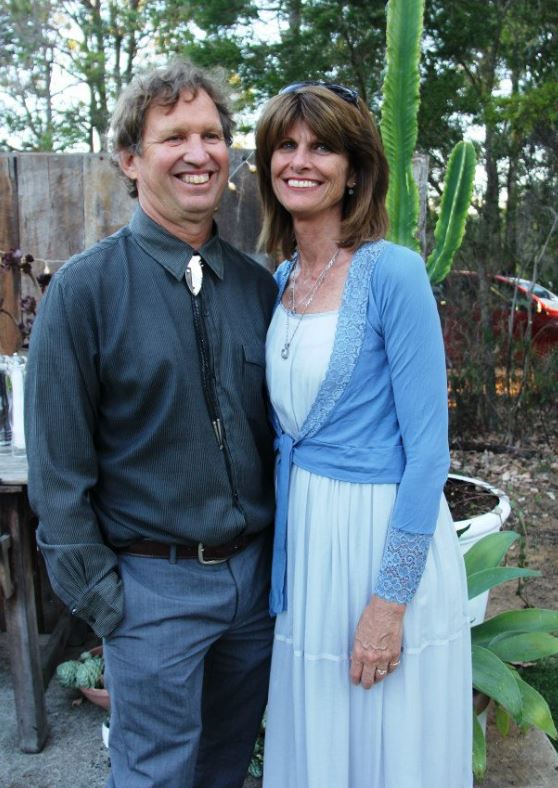 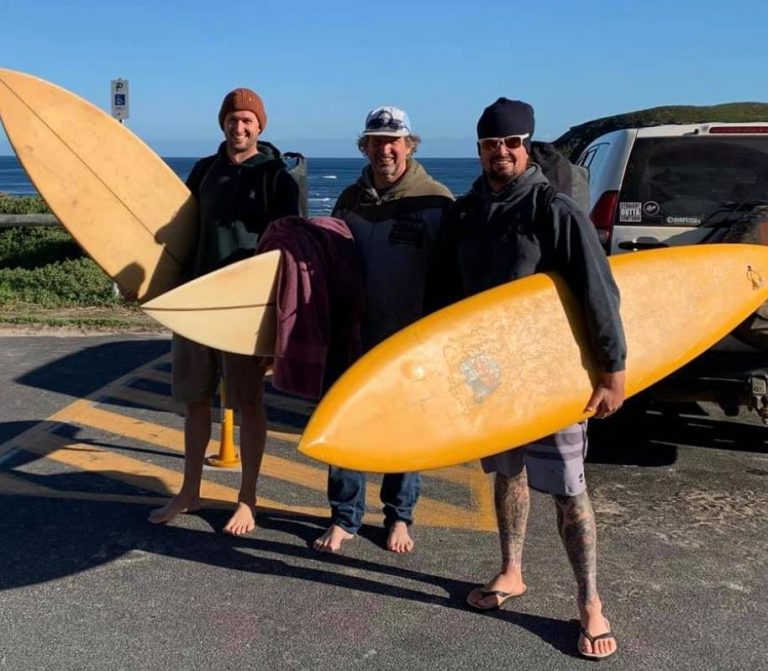 It’s no coincidence that most of Margaret River artist Mark Heussenstamm’s studios were found close to great surf. For more than 50 years he has divided his time between creating art and catching waves.

Born in Los Angeles, the 68 year-old migrated with his wife Leslie to Australia in 1975. Known locally as “Heusso”, he says the surf is the simple reason he has stayed in Margaret River since then, though he has maintained studios in various cities in the United States.

Heussenstamm’s creation include a variety of large Cat, fish and surfing sculptures. “Most of the fish will be made out of surfboards or plywood with metal pieces,” he says.

A self-taught artist, Heusso says his works are characterised by his use of recycled materials.

“I’ve made pieces out of everything, from old stoves to the front ends of cars. You find some things and you go ‘Oh, I’ll make that out of that’, and then other times you go ‘Oh, I’d like to make this’, and you start gathering pieces. It’s inspiring to find stuff that you can reconstruct into something that makes people smile. Hence why they refer to what I do as constructivism, a fancy word for a scrounger.”

His interest in giving new life to discarded materials sometimes takes him away from the surf. “A lot of people always say ‘You must be really inspired living in Margaret River because it’s so beautiful’ but you do your best work when you’re in the city because there is lots more junk there and there’s lots more stuff you can find.”

What is a Serigraph?

A Serigraph is a handcrafted high quality rendition of an original piece of artwork, created by the silk-screen printing process.
A serigraph is created when paint or ink is ‘pushed’ through a silkscreen onto paper or canvas.

The silk-screen printing process uses a stencil to create the print of an image or a design.
Stencils have been used for centuries to make fine art prints. Making a serigraph is a very labor intensive process. 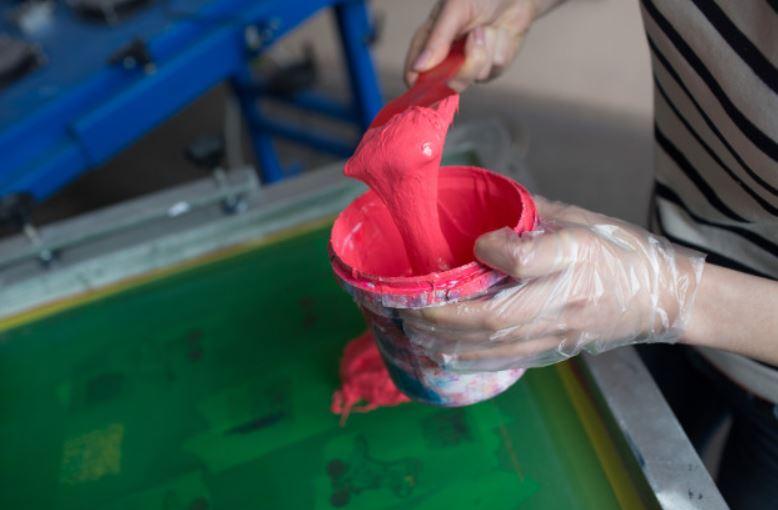 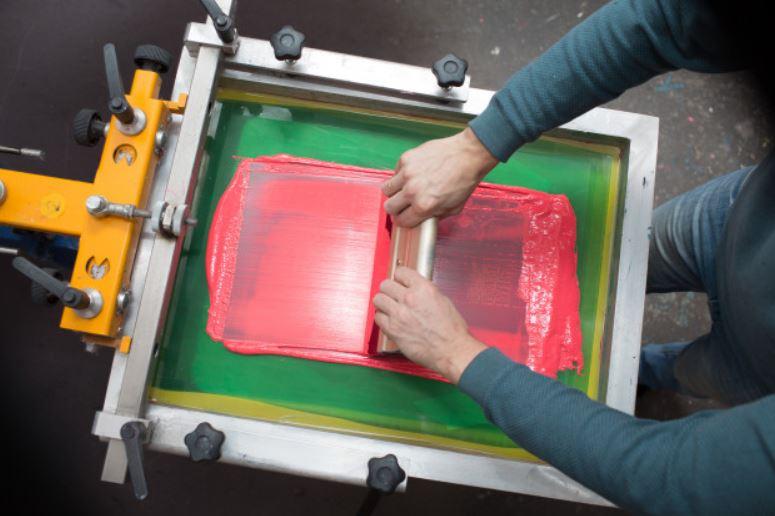 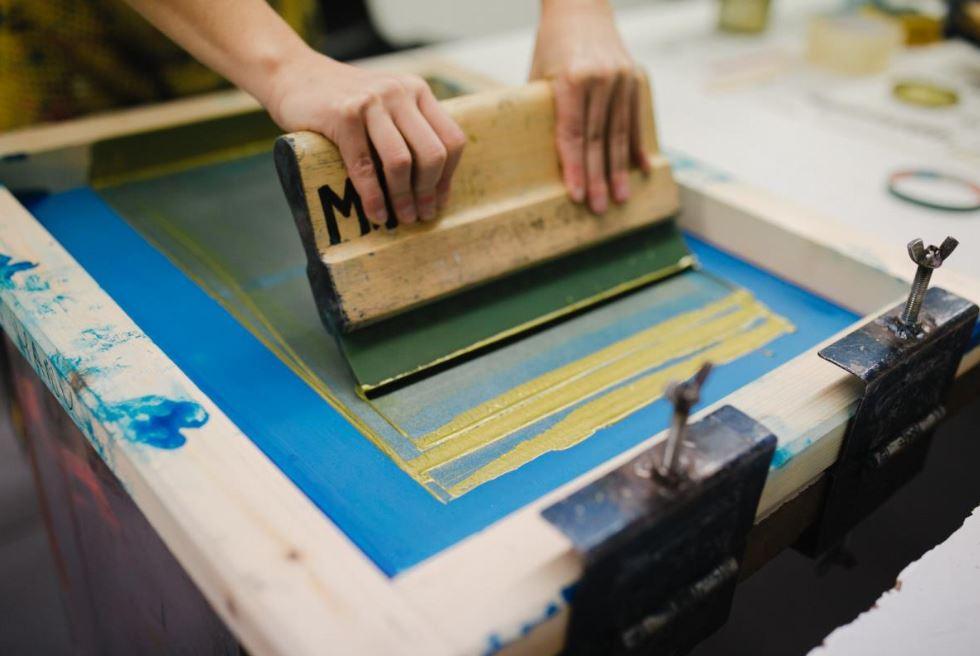 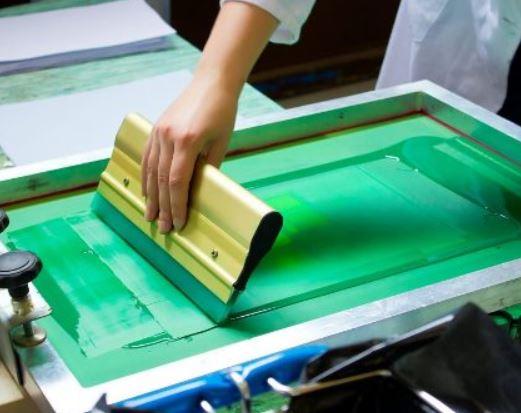 (Once purchased - Your artwork will be shipped within 1 business days)

Please contact us with your order and/or any questions
about Heusso's Artwork, thank you.

Designed and Maintained by HellerMarketing.com